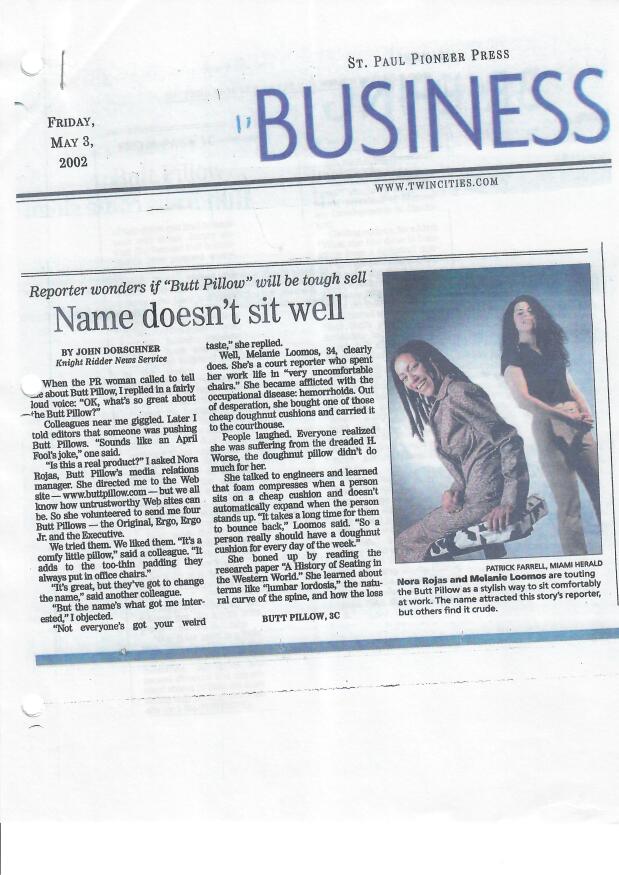 The Scandinavian Journal of Rehab. Medicine 15:197-203, 1983. “Posture of the Trunk when Sitting on Forward-Inclining Seats,” written by Tom Bendix and Fin Biering-Sorensen from The Laboratory for Back Research, University of Copenhagen, Denmark:

The above-mentioned study states: “Changes in posture during one hour of sitting were measured by a statometric method on 10 subjects. Four seats were used, one horizontal and three with forward inclinations respectively of 5 degrees, 10 degrees, and 15 degrees. With increasing forward inclination of the seat, the spine moved toward lumbar lordosis.”

“A supplementary sample showed that 1/3 of the body’s adaptation to the seat inclination took place in the spine and 2/3 in the hip joints. A tendency to a more vertical position of the trunk as a whole was observed on the 5 degree chair but the posture of the cervical (neck) spine was not influenced by the seat inclination. . .a comfort evaluation showed the 5 degree forward inclination and the horizontal seats to be preferred.”

“The purposes of the above-mentioned study were:
1. “To compare spontaneously chosen posture when sitting for one hour on each of the four seat inclinations — horizontal, 5 degrees, 10 degrees, and 15 degrees forward — and to estimate the adaptability of the trunk and hip joints to different forward inclinations of the seat.
2. “To follow the changes of the spinal curves during one hour of sitting on one seat.
3. “To evaluate comfort in relation to the different seat inclinations.”

“To accustom the subjects to a forward-inclining seat, their homes were furnished with a tiltable office chair at least two weeks before the experiment. The seat could tilt from 5 degrees backwards to 15 degrees forwards . . . to ensure that the thighs conformed to the seat surface, height adjustment was effectuated by placing the seat at first a little too high, with the legs hanging freely, and later lowering it until the feet rested on the floor with the lower part of the legs vertical. Approximately 2/3 of the thighs were resting on the seat.

“At the end of the period of sitting, all subjects were asked to estimate the degree of comfort on each specific seat inclination, using a scale from 1 (poor) to 5 (excellent.). The same scale was used to rate the tillable chair they had used for two weeks in their home. The comfort evaluation that was done in the above-mentioned study, “shows a preference for the 0 degree and the 5 degree inclinations.”

“The corresponding comfort evaluation of the office chair with the tiltable seat, which the subjects had in their homes, was of the median 3.5 (5 execellent to 1 poor) (range 1-5).”

I was a court reporter for 10 years then became an inventor. I invented The Buttpillow® and was granted a patent called the "Pillow with Cantilever Supports." At the same time, I also submitted a patent application for "The Carpal Tunnel Chair," which I was advised I did not get. After R&D on The Buttpillow®, I submitted another patent application for the "Ergonomic Seating Cushion" was filed and later amended to include an embodiment for women during pregnancy. The USPTO granted the "Ergonomic Seating Cushion" patent in late 2002. Subsequently, in 2003, I also invented Ergosoft™ break reminder software to remind people to take breaks with an Ergo-Tip™ so people can identify and minimize ergonomic risk factors around them. View all posts by Melanie Loomos